Get quality term paper help at Unemployedprofessor.net. Use our paper writing services to score better and meet your deadlines. It is simple and straightforward. Whatever paper you need—we will help you write it!

The genetic scripts written in DNA code constantly undergo changes, or mutations. At times, these mistakes in a gene’s message can be harmful; often, they have no significant effect. Occasionally, though, a mutation confers a survival advantage in the face of an environmental change. Most of the non-carriers of the mutation die, and those with the mutation are able to reproduce. With that powerful evolutionary selection force, the gene can become common in a population.

Scientists were astonished to find that some individuals did not become infected with HIV, even after repeated exposure to the deadly virus. For some reason, they were immune. A long and difficult scientific search, using blood samples from hundreds of HIV-resistant patients, finally teased out the genetic explanation. Resistant individuals had in their cells two copies of a mutation that disrupted the entryway through which HIV viruses entered white blood cells. People who inherited just one copy of the change could become infected, but their disease progressed more slowly. With this being such a recent epidemic, where did peoples’ immunity come from?

Another puzzle was the way this resistance is distributed throughout the world. In some Northern European populations it is relatively common. In Southern Europeans it is more rare, and it is almost entirely absent in Africans, Asians, and Native Americans. Logically, the mutation must have occurred in the past, acting as a defense against a different, previous epidemic caused — like the AIDS epidemic — by a pathogen that also targeted white blood cells.

Reading a chronological history, biologists traced the HIV-resistance gene mutation back about 700 years. That was the time at which the Black Death (bubonic plague) swept through Europe, killing one-third of the population. Then, as now, there were individuals who survived the lethal organism, perhaps because it could not enter their white blood cells. The areas that were hardest hit by the Black Plague match those where the gene for HIV resistance is the most common today. After trying to infect such resistant cells with bubonic plague bacteria to test the hypothesis that the mutation in the CCR-5 receptor gene could have thwarted the plague in the Middle Ages, as it does HIV today â€“ results suggested a different disease might be more likely. Focus has now moved to looking at smallpox as the catalyst. This will be yet another illustration of what scientists are finding over and over in the human genome: Nature’s past successes often remain part of our genetic toolbox.

Since the reporting of the first cases of AIDS in 1981, and the discovery of its etiologic agent, human immunodeficiency virus type 1 (HIV-1), in 1983, there has been substantial scientific progress in the development of both effective antiretroviral therapy and the understanding of virusâ€“host cellular interactions. Nonetheless, the correlates of effective immunity to HIV remain elusive, and the paucity of knowledge has hindered development of effective vaccines. One approach to understanding the immune response to HIV and why it fails in most people lies in examining those few hosts who appear to be resistant either to acquisition of the virus or to its devastation once acquired.

Scientists have considered the possibility that HIV-2, the less virulent form of HIV found in West Africa, evolved from a form of SIV (simian immunodeficiency virus) found in sooty mangabeys (SIVsm). Recently published research demonstrates that HIV-1, the form responsible for most AIDS cases, almost certainly evolved from a type of SIV (SIVcpz) that occurs in West African populations of chimpanzees (Pan troglodytes troglodytes). Researchers postulate that transmission from chimpanzees to humans occurred at least three different times, probably while human hunters butchered carcasses of chimpanzees killed for food. Evidence of the evolutionary history of the HIV virus, and the fact that chimpanzees apparently suffer few, if any, ill effects from SIVcpz infection, illustrates a successful pathogen. It is beneficial for pathogens to be sufficiently benign so as not to kill their hosts immediately, since less lethal pathogens are able to infect more hosts and increase their own reproductive success.

*Substantive comments extend the conversation, ask a question, or offer an observation â€“ strive to create a dialogue. Comments that consist of only praise will be awarded 1/5 points.

student 1: As we know so far, mutation is the changing of the structure of a gene, resulting in a variant form that may be transmitted to subsequent generations, caused by the alteration of single base units in DNA, or the deletion, insertion, or rearrangement of larger sections of genes or chromosomes. At times, these changes can be seen as mistakes and these mistakes in a gene’s message can be harmful; often, they have no significant effect. Occasionally, though, a mutation confers a survival advantage in the face of an environmental change. Most of the non-carriers of the mutation die, and those with the mutation are able to reproduce. With that powerful evolutionary selection force, the gene can become common in a population. Today I will share with the class more about the Ebola virus disease.

Ebola virus disease (EVD), formerly known as Ebola haemorrhagic fever, is a severe, often fatal illness in humans.The Ebola virus causes an acute, serious illness which is often fatal if untreated. Ebola virus disease (EVD) first appeared in 1976 in 2 simultaneous outbreaks, one in what is now, Nzara, South Sudan, and the other in Yambuku, Democratic Republic of Congo. The latter occurred in a village near the Ebola River, from which the disease takes its name. The 2014â€“2016 outbreak in West Africa was the largest and most complex Ebola outbreak since the virus was first discovered in 1976. There were more cases and deaths in this outbreak than all others combined. It also spread between countries, starting in Guinea then moving across land borders to Sierra Leone and Liberia. The incubation period, that is, the time interval from infection with the virus to onset of symptoms is 2 to 21 days. Humans are not infectious until they develop symptoms. First symptoms are the sudden onset of fever fatigue, muscle pain, headache and sore throat. This is followed by vomiting, diarrhoea, rash, symptoms of impaired kidney and liver function, and in some cases, both internal and external bleeding. Ebola is introduced into the human population through close contact with the blood, secretions, organs or other bodily fluids of infected animals such as chimpanzees, gorillas, fruit bats, monkeys, forest antelope and porcupines found ill or dead or in the rainforest. Ebola then spreads through human-to-human transmission via direct contact (through broken skin or mucous membranes) with the blood, secretions, organs or other bodily fluids of infected people, and with surfaces and materials (e.g. bedding, clothing) contaminated with these fluids.
Supportive care-rehydration with oral or intravenous fluids- and treatment of specific symptoms, improves survival. There is as yet no proven treatment available for EVD. However, a range of potential treatments including blood products, immune therapies and drug therapies are currently being evaluated.
An epidemiological analysis of Ebola virus disease in West Africa was performed based on 26 593 cases from March 2014 to May 2015. Compared to the peak of the outbreak, the number of new cases per day has decreased by 92.13% in Guinea and 97.70% in Sierra Leone. It was predicted that the Ebola outbreak in West Africa would end in June 2015.

http://www.who.int/mediacentre/factsheets/fs103/en/ (Links to an external site.)

student 2: In this assignment, I would like to share with the class about Marburg virus because it is one of the most dangerous virus. It is named after a small and idyllic town on the river Lahn – but that has nothing to do with the disease itself. The Marburg virus is a hemorrhagic fever virus. Signs and symptoms typically begin abruptly within five to 10 days of infection with Marburg virus. Early signs and symptoms include fever, severe headache, joint and muscle aches, chills, weakness. Over time, symptoms become increasingly severe and may include: nausea and vomiting, diarrhea (may be bloody), red eyes, raised rash, chest pain and cough, sore throat, stomach pain, severe weight loss, bruising, bleeding, usually from the eyes, and when close to death, possible bleeding from the ears, nose and rectum, internal bleeding. As with Ebola, the Marburg virus causes convulsions and bleeding of mucous membranes, skin, and organs. People at risk are those who come in contact with African monkeys (bushmeat means meat from monkeys) and bats; individuals who research these viruses are also at higher risk of becoming infected. There have been several outbreaks in Africa in miners due to their exposure to bats. Veterinarians may also be at higher risk if they are exposed to African monkeys. Also, people who care for Marburg virus-infected patients and health workers who remove those bodies of deceased Marburg virus-infected patients are at high risk of contracting the disease. The case-fatality ratio for this disease ranges from 23% to 90%. Since now there is a new treatment for Marburg virus, the number of patients is decreasing, and the number of fatalities is dropping down. student 3: Cholera is an infectious disease cause by the some strains of bacterium Vibrio cholerae in small intestine. Cholera mainly caused by bad sanitation and un-clean water(drinking, use for vegetable growth, seafood lived in polluted water, etc.). 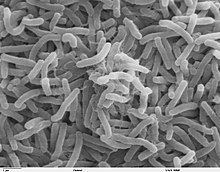 (gram-negative cell that habitat in salt-water)

The primary symptoms of cholera are profuse diarrhea and vomiting of clear fluid, half day to 5 days after ingestion of Vibrio cholerae, which can cause dehydration, people’s skin will turned blue/grey because of loss of huge amount of fluid. Lower body temperature or fever can also happened.

One of most important prevention of Cholera is keep sanitary, treatment include antibiotic for different strain of Vibrio cholerae , oral vaccine Dukoral and (ii) Shanchol and mORCVAX

Our affordable academic writing services save you time, which is your most valuable asset. Share your time with your loved ones as our Unemployedprofessor.net experts deliver unique, and custom-written paper for you.

Improve your grades with our essay writing service. Classically written, 100% customized and plagiarism-free essays on every academic subject.

Of course you can write. You just have better things to do with your time. As you know, time is the most important thing these days and we understand that you turned to us to save yours. Buy an assignment today by clicking the button below, ace that essay, and stay ahead of your classmates.

We write all types of papers in different subject areas from scratch. While at it, we protect your personal information like a vault in Fort Knox. We also use secure encryption for all transactions and guarantee to never share personal details with third parties.

Open Chat
cj 500 final project guidelines and rubric logistical considerations
Scroll to top
Open chat
Need help with your assignment?
Are you looking for the answer to the posted question or help in writing your assignment/essay? You can now contact our live agent on WhatsApp +1 (940) 905-5542